Adelante Mujer is a life-giving investment in young women who aspire to become medical doctors in Nicaragua.  They make an enormous improvement in the medical care of people who have had no access to it.

Adelante Mujer (Advance Woman) is a 501(c)(3) charitable organization based in the United States. Through the hard work of volunteers and the generous giving from donors, they are able to help the women of Nicaragua achieve their dreams and goals of becoming medical doctors.

Often, a select few of the board members would travel to Nicaragua to interview prospective students and attend various events such as graduation ceremonies for the new doctors. Sisters Ann & Diane of St. Agnes, armed with a high resolution camera, would collect photos of the students and new doctors as a testament to the success of the organization.

Wedged between Costa Rica & Honduras, the primarily Spanish-speaking Nicaragua is very poverty stricken. With a largely corrupt government, the country erupted into widespread protests that were often met with violence. Over time, this political turmoil made it increasingly dangerous for travel; the sisters had to cancel or limit the visits. But the work of the students and Adelante Mujer continues, with more than 60 women fulfilling their passions and advancing the socioeconomic status of women in Nicaragua by becoming practicing medical doctors. 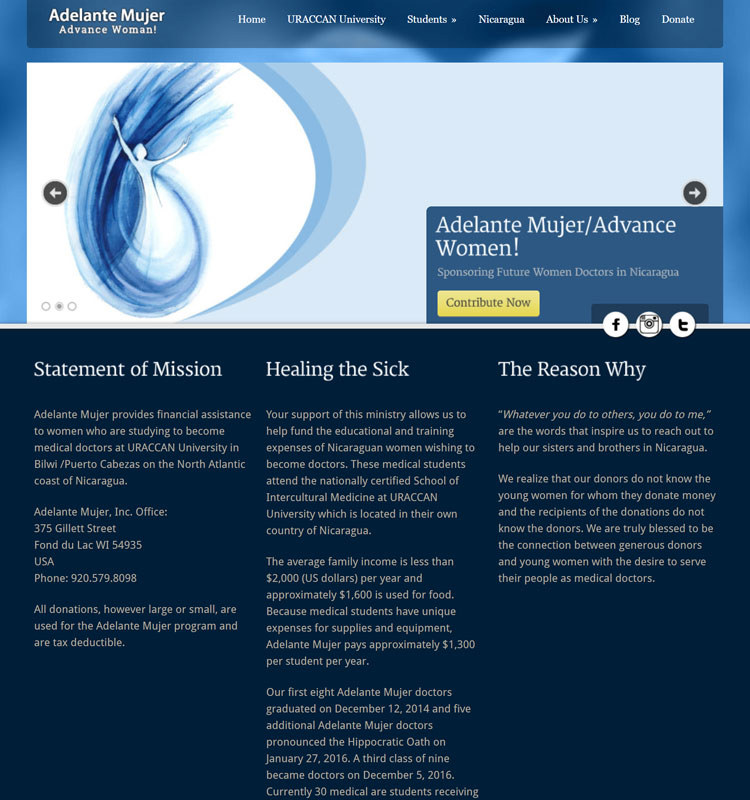 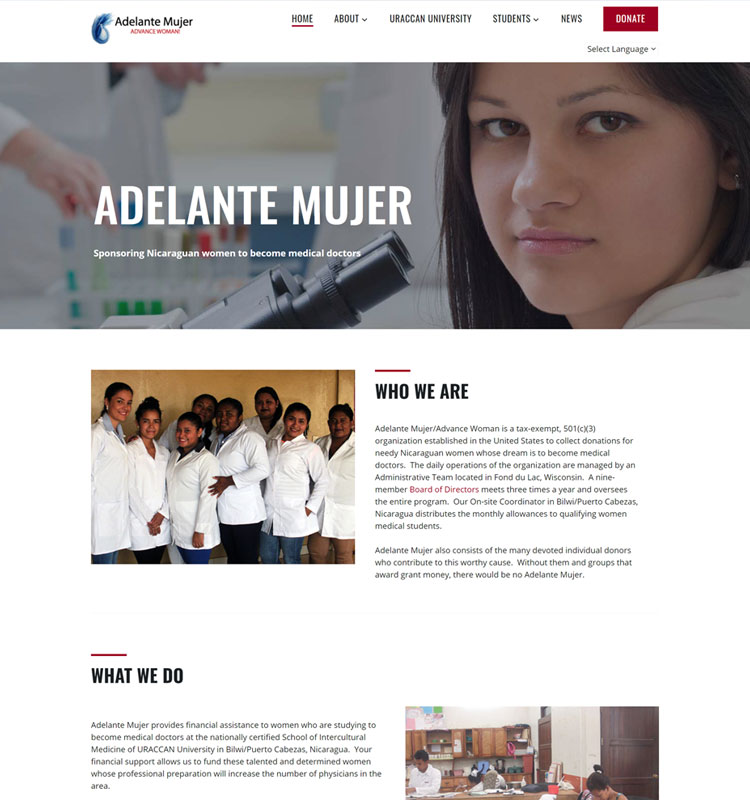 Adelante Mujer’s past site served a purpose at the time, however the speed of the site was affected due to the old coding. Additionally the site needed to be responsive with a fresh new site design on a limited budget. Moreover, it was critical to accept and process donations from their visitors, in a secure manner for this worthy cause.

The undertaking of the WomanAdance.com site rebuild was extensive, especially with the limited imagery and content on the site. We encouraged the sisters to create content and articles on a regular basis to keep the site fresh and current and they have done a great job!

Based on discussions and the limited budget, we helped choose a WordPress theme to keep the cost down. This theme needed to be responsive, with the focus on presentation, site structure, and the processing of donations.

In addition to populating this site we also made modifications in the site’s design and functionality.

“Whatever you do to others you do to me” are the words that inspire us to reach out to help the people of Nicaragua.

The old site was showing its coding age, hindering the speed as well as design and usability. This new responsive theme allowed us to help bring them into a fully functional site allowing their visitors to donate for the cause.

An illustrative map pinpoints the location of the students, allowing viewers to appreciate how widespread the efforts of the charity are across Nicaragua. The large, clear images give visitors a window into the meaningful work being done by the board and the students.

“It is very noticeable when a site is old and out of date and ours is neither.  That’s thanks to YOU and Glendale Designs!  So, your name continues to be mentioned in our humble “International Office!”  We are forever grateful for all your teaching and service.”